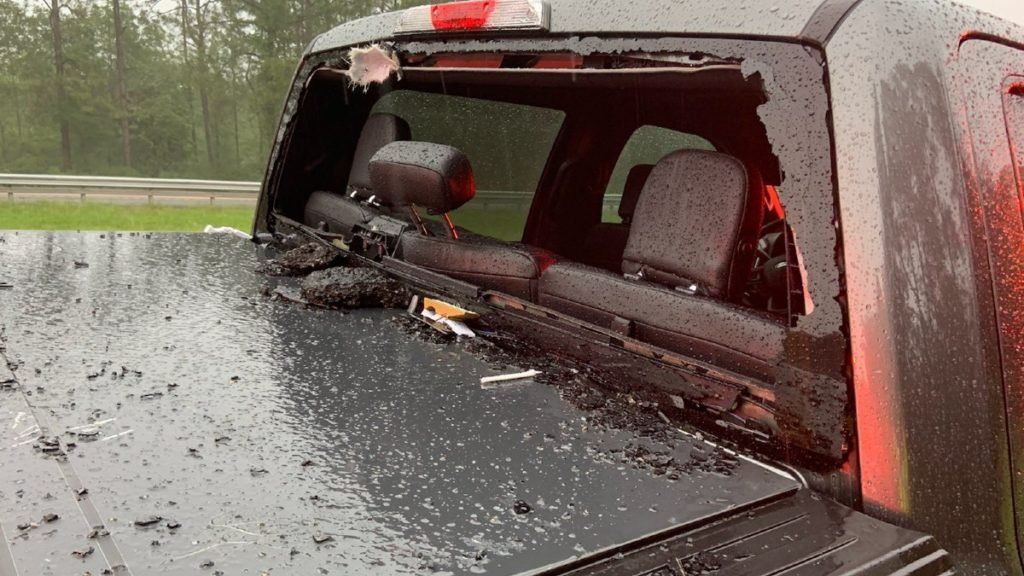 Wayne and Cheryl Wilkerson were traveling from Kentucky to Cape Coral on Interstate 10.

“We’d been doing like 40 because it’s been raining so hard,” said Wayne Wilkerson.

Lightning struck the road in front of a car, causing a chunk to blast through the windshield. First responders described the the hole in the highway as ‘dinner plate sized’.

“The blacktop in front of us and it just exploded and shot it through our truck,” said the Wilkersons.

The couple said they thought a bomb had gone off in front of their car.

“It went through the front windshield all the way through the back window on the truck and it took out one of the headrests in the back seat and was laying on the bed cover on the back of his truck,” Cheryl said.

The couple was rushed to the hospital. Wayne suffered cuts and bruises on his face from the broken glass and asphalt.

“I was still picking glass out of my face last night,” Wilkerson said.

Cheryl said she also had cuts and bruises but the extent of her injuries were much more serious.

“My main injury was the head. It kind of scalped  the whole layer of the top of my head,” Cheryl said.

Cheryl’s surgery was successful and now the Wilkerson’s are back home in Kentucky, thankful to still have each other.

“We’ve been married 43 years and we’ve been through a lot together but I would say this is the biggest thing we’d ever have to go through together,” the Wilkerson’s said.