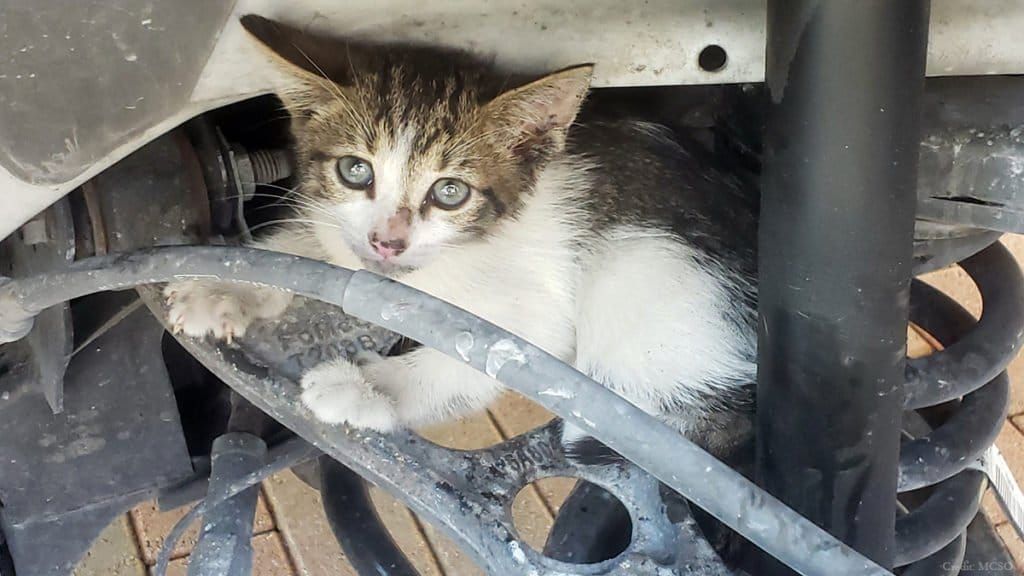 MONROE COUNTY, Fla. – Monroe County deputies saved a kitten on Monday after they found it hitching a ride under a deputy’s patrol car.

Reports came in just after 9 a.m. of a kitten running close to traffic on the Seven Mile Bridge. Deputy Jonathan Rodriguez responded to the call and found an adult cat that was dead — suspected to be the kitten’s mother — in the road.

According to the sheriff’s office, Deputy Rodriguez saw the kitten run toward his patrol car and apparently exit the bridge. He kept looking for the kitten near the base of the bridge but couldn’t find it, alerting other deputies of where the kitten may be and that it might reenter traffic.

Hours later, around 6 p.m., a cat was heard meowing from under Deputy Rodriguez’s patrol car. The kitten was found sitting on the car’s rear axle, the sheriff’s office said.

Several deputies tried to rescue the kitten, calling for help from the Florida Keys Society for the Prevention of Cruelty to Animals.

Cat food was used to try and lure the kitten out but it didn’t work, so both rear tires were taken off the patrol car as the kitten kept retreating to a small space between the rear axle and the fuel tank, said MCSO.

Finally, an animal control officer was able to safely get the kitten out from underneath the car.

The kitten’s been nicknamed “Pawcifer Lucky” and is now resting comfortably at the FKSPCA in Marathon.