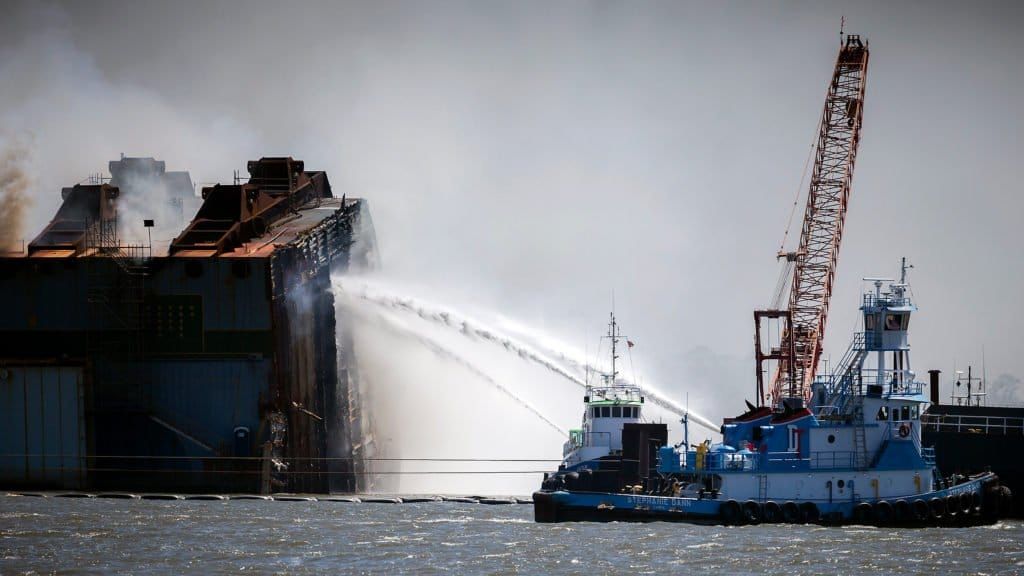 The fiery wreckage of a cargo ship off the Georgia coast has been extinguished, according to a press release from the St. Simons Sound Incident Unified Command, as responding firefighter teams continue to monitor for additional flames.

The wreckage of the 656-foot Golden Ray caught fire during salvage operations on Friday and seawater was used to extinguish the blaze, according to the US Coast Guard.

“Early this evening our firefighting teams successfully put out the fire inside the Golden Ray wreck,” said Coast Guard Cmdr. Efren Lopez. “Safety is our highest priority and every member of the response displayed tremendous commitment to ensuring that emergency plans were followed during the entire fire fighting and evacuation evolution.”

The Golden Ray caught fire just after lunchtime during cutting operations and spread to some of the vehicles remaining on what’s left of the ship, Lopez said in an earlier news conference.

Seawater was being used to put out the fire instead of chemicals, he said, minimizing any environmental concerns.

The Coast Guard also is monitoring air quality around the vessel and has not seen anything that would cause concern, Lopez said.

An assessment will be done to see how the fire started, he said, which was located on the top decks of the ship.

Responders were conducting pre-cutting operations and actively using fire-suppression systems as a preventative measure when the fire began, Lopez said, adding that the Coast Guard anticipated fires breaking out as workers began work on cutting the wreckage.

No injuries were reported, Lopez said. Nonessential crew members were evacuated from the VB-10,000, the 255-foot-tall crane vessel that does the cutting and lifting of the wreckage, Lopez said.

The cargo ship, carrying more than 4,000 vehicles, capsized on September 8, 2019, in St. Simons Sound near Jekyll Island, CNN reports. Four crew members trapped in the wreckage after the ship capsized were rescued.

The wreckage has remained in the water ever since then. The Coast Guard and other agencies developed a plan to remove the wreckage, which began in earnest in November 2020 after delays due to the coronavirus pandemic and last summer’s active hurricane season.

The removal plan calls for the ship to be cut into eight giant pieces with a giant diamond-cutting chain suspended from the VB-10,000.

So far, four sections have been removed, the latest being the ship’s engine section, which was removed on May 8.

The VB-10,000 vessel doing the cutting comprises two metal towers, about 240 feet tall, each connected to a barge and to each other at the top, according to CNN. A crane will remove the sections after they have brackets attached to the side, the vessel will move, and the crane will put each section on a barge, which will take them to a recycling facility in Louisiana.