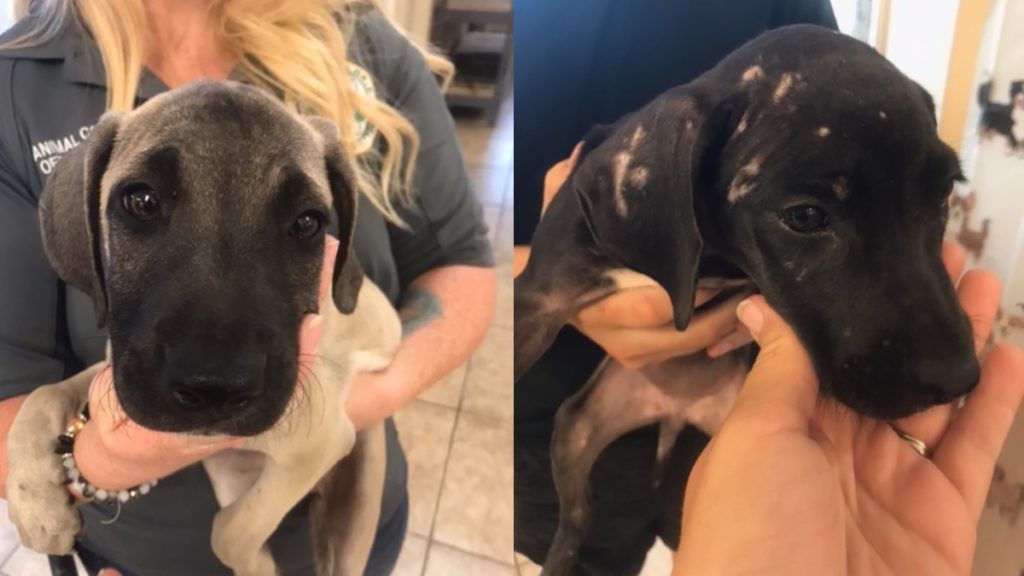 CLEWISTON, Fla.– A good Samaritan makes a disturbing discovery in Clewiston after finding five dogs abandoned near a canal on Wednesday morning.

Jamie Wright and Amanda Nelson, who work for the Clewiston Animal Control, said they rushed to Evergreen and Art Lawrence roads in a rural part of Clewiston searching for the puppies.

“They dumped a bag of puppy chow and that was it. It was on the edge of a canal bank by some cane fields,” said Wright.

Three dogs were located and rushed to the Cape Coral Animal Shelter for treatment. Two of the three dogs found initially had zip ties choking the base of their tail. One of the dogs still had the orange zip tie attached when he arrived to the clinic.

“There’s quite a bit of damage to that tail. They are definitely inflamed, they’re purple, and cold to the touch,” said Veterinarian Kristie Welsh.

Jamie and Amanda weren’t done hunting down dogs. On Wednesday evening they went back to the rural area searching for two more dogs reported missing and they found them. One dog’s tail was zip tied, the other had already lost its tail.

The Cape Coral Shelter says tying off a dog’s tail is common for certain breeds and among hunting dogs but placing a zip tie on their tail to do it is abuse.

“It’s cruel, it’s inhumane but it’s not illegal. It needs to be done by a veterinarian,” said McCauley.

The five dogs are on the mend. They will be available for adoption when their surgeries and other health issues are resolved.

Wright and Nelson say the only way to negate this type of abuse is to speak up when you see it.

“If you see something, say something. You’ve got to be a voice for those animals,” said Nelson.

The post Abandoned dogs found near Clewiston canal with zip ties on their tails appeared first on NBC2 News.